Taking inspiration from our Deep Dish Tart this treat will make any Snicker's lover happy, our dark chocolate brownie crust, filled with a peanut butter & marshmallow nougat, a sprinkling of salted roasted peanuts, covered in runny caramel, then topped with Belgian Chocolate ganache and decorated with 4 Snickers' Bars.

Did you know it takes 12 brownies just to make the crust?

This product is not suitable for vegetarians.

Pie of the Month - Snicker's Tart

I have never tasted anything so delicious in all my days. The only thing that would have made this my ultimate would be adding orange to it, this only because of my chocolate orange obsession. I genuinely believe this is the best brownie company by far. If you are in any doubt, try it and see for yourself. You won’t regret it 😊😋

Thank you Helen for another amazing review, if you would like the next one to taste of orange just let us know in the comments, we always have orange oil to hand so can orangify it:)

It is nice but it is very expensive!

Absolutely delicious. You have to try this.

Delicious brownies! They make you want to eat more!

So after much deliberation, I went ahead and ordered this 😱 it was the most expensive dessert iv ever had but it was my birthday so 🙃 and it really did not disappointi I mean its the best thing that's entered my mouth ever! and that is saying something as I'm a fatty 🤣 it was so luxurious so decadent you only needed a slither and miked well it was divine It's worth every single penny!! I wish you did a smaller version of this just as I gave half away but wow you are master macigians in the kitchen! It metled not a morsel was wasted, I did have a little rocky start as they were away on annual leave and the day of delivery I hadn't received tracking info so I sent a email and I got one back the same day to say the systems had been down and they were unable to upload tracking details but within minutes I received them and the tart was delivered on the day I had picked so thank you very much for that it really was appreciated as I'd of been stuck without one, definitely I will be back for more I'm not a brownie lover usually but this was just next level and sooo worth a good review thank you again you actually made my birthday 😀 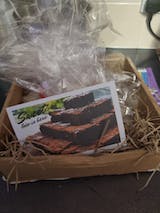 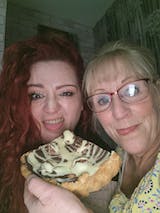 I sent a box of Brownies for my father’s 93rd birthday. He was delighted to receive the lovely selection of Brownies in the post. The box arrived on the day, well presented and full of a nice selection. Thank you.

I absolutely loved this! Stick it in the microwave for 20 seconds and you've got heaven!